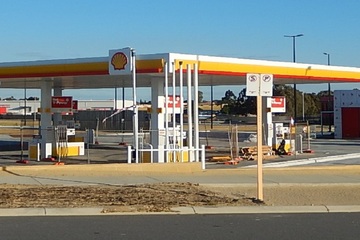 Perth, WA (23 November, 2016) The construction of a Shell Service Station at Wangara, in Perth’s north, represents the missing service link in Stage 1 of the Northlink Industrial Park[1], which is nearing completion, according to Daniel Romero, Commercial Sales and Leasing Agent, Raine & Horne Commercial Perth.

Located on the prime intersection of Niche Parade and Ocean Reef Road, Wangara, the Shell outlet fronts Ocean Reef Road, enabling it to enjoy prime exposure and excellent access. More than 23,000 vehicles will pass the new petrol station daily, a figure expected to increase to 30,000 by 2021 due to the region’s commercial growth, and considering the proposed urban development of East Wanneroo, according to Mr Romero.

“Over the past few years, there has been a shift in focus in Wangara to amenity-driven business locating there, with several high-end cafes seeking to trade in the precinct, rather than the typical lunch bars of the past.

“There has also been strong demand from service station outlets witnessed by the emergence of three new service stations in the Wangara and Landsdale area within the last 12 months.

“These include two 7Eleven sites, one on Gnangara Road and the other on Hartman Drive, as well as the new Shell outlet, and the presence of the fuel-industry heavyweights illustrates the demand for amenity-driven commercial assets in the area.”

There is now a total of six service stations within a 3-kilometre radius servicing the Wangara and Landsdale industrial estates.

Meanwhile, Raine & Horne Commercial WA is in the final stages of land sales within the Northlink Industrial Park. To date, the firm has sold 135 lots sold totalling over $118 million in industrial land assets.

“Only a handful of blocks are expected to be released in the final stage covering 3.5 hectares.”

The Northlink Estate has proven to be a huge success in accommodating the growth of local businesses in Perth’s industrial north, according to Mr Vulinovich.

“Shell saw fit to jump in and purchase the Ocean Reef Road property when the first lots of Stage 1 hit the market in 2013, and the new petrol station will provide the impressive Northlink Estate with business amenity at its main entry point. It also illustrates the strong demand we have had for these prime sites.”

“Construction across the estate has moved ahead at a consistent rate over the last three years, and there is now a good mix of green title and strata title, along with a balance of owner occupiers and developers.

“That said, we still have some warehouse units available for sale or lease to accommodate all requirements from 100sqm to over 2,000sqm.”

To find out more about the commercial sales opportunities at Northlink Industrial Park, contact Raine & Horne Commercial WA on 08 9380 4500