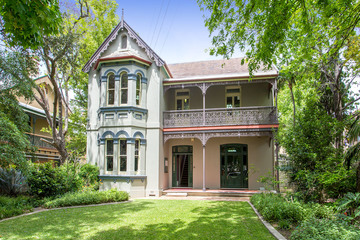 The property, located at 62 Prospect Street, Rosehill, was originally known as ‘Cransley” and is most likely to have been built in 1889, more than 50 years after Macarthur’s death.

“This is truly a rare commercial acquisition, given its chain of title traces the land back to 8 October 1816, when it was part of a grant of 850 acres to John Macarthur by Governor of NSW, Lachlan Macquarie,” said Mr Surian.  The grant also included Harris and Experiment Farms.

William Cameron, a builder took ownership of the Rosehill property and is most likely to have built the home in March 1889. It was subsequently used as a residence by several owners, with the land holding gradually reduced by subdivisions.

One of the property’s most famous owners was Edwin John Brown a surveyor and alderman, who served Parramatta Council for 29 years in the early decades of the last century. NSW Governor Sir Phillip Game visited the stately home to confer an Order of the British Empire on Alderman Brown.

In 1982, the property was used as a boarding house, receiving a fitting new name, “Comfort Lodge”. “The name change reflected the adaptability of the home from its glory days as a residence for Alderman Brown,” said Mr Surian.

The current owner, Zestale Pty. Ltd acquired the property in March, 1989, a century after the magnificent home was built. The directors Ken and Bell Loughhead recognising the possible commercial use for the building, with the assistance and guidance of several associates, managed its restoration and the assembly of a document called, “The Chain of Title”. This document links the property back to John Macarthur and will be available to the successful purchaser or lessee.

Over the last 27 years, the property has been utilised as a professional chamber by chartered accounting firm Loughhead Roberts Pty Ltd and its successor.

“Clients visiting the property, regularly comment about its beauty, the relaxed atmosphere it affords and the ease of parking provided,” said Mr Surian.

This magnificent property within 15 minutes’ walk of the Parramatta CBD could continue as professional rooms, for other uses with the consent of council and heritage authorities, or given its residential zoning, be converted to the original splendour as a grand two storey home conveying the wealth of the last decade of the nineteenth century.”

The property features a generous land area of 1410 square metres, is zoned R4 high density residential and offers a lettable area of 353 square metres over two levels. In its present configuration, it comprises 14 rooms, three bathrooms, a garage and hard stand parking for more than ten vehicles. It also includes a large kitchen, a courtyard and well-established and maintained gardens.

Typical of late Victorian era buildings, the magnificent residence is endowed with cast iron columns and balustrades, which are a feature of its balcony and veranda.

“The lessees are relocating after five years because of business growth, and the current owners are flexible about selling or leasing the property,” said Mr Surian.

“The decision to offer the property for sale or lease was taken after the owners reviewed their investment portfolio.”

The property hits the market at a time when the City of Parramatta is enjoying a massive spike in infrastructure spending.

“Parramatta has a long history as an entrepreneurial hub dating back to the early years of the colony, when it was the seat of political power in NSW, while Harris Park and Rosehill were home to the colony’s entrepreneur class,” said Mr Surian.

“Billions of dollars are being spent on the likes of the redevelopment of the old Cumberland Hospital as a mixed-use precinct, the massive refurbishment of Westmead Public Hospital the opulent residential tower, which is being constructed by V by Crown Group[vii], and Meriton’s Altitude development, which includes 375 designer apartments.

“There’s also the new Parramatta Square, a 3-hectare precinct development that will provide the city with a new civic heart. This massive infrastructure injection is unprecedented for Parramatta, and even bigger relatively speaking than early colonial investment in the region. In combination, the infrastructure focus is sure to increase demand for quality mixed-use real estate assets such as 62 Prospect Street, Rosehill.”

For more information about the commercial property market in Parramatta, download a copy of Raine & Horne Commercial Insights.