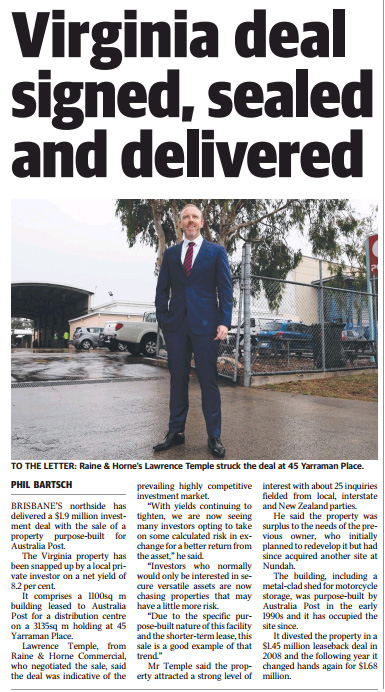 BRISBANE’S northside has delivered a $1.9 million investment deal with the sale of a property purpose-built for Australia Post.

The Virginia property has been snapped up by a local private investor on a net yield of 8.2 per cent.

It comprises a 1100sq m building leased to Australia Post for a distribution centre on a 3135sq m holding at 45 Yarraman Place.

Lawrence Temple, from Raine & Horne Commercial, who negotiated the sale, said the deal was indicative of the prevailing highly competitive investment market.

“With yields continuing to tighten, we are now seeing many investors opting to take on some calculated risk in exchange for a better return from the asset,” he said.

“Investors who normally would only be interested in secure versatile assets are now chasing properties that may have a little more risk.

“Due to the specific purpose- built nature of this facility and the shorter-term lease, this sale is a good example of that trend.”

Mr Temple said the property attracted a strong level of interest with about 25 inquiries fielded from local, interstate and New Zealand parties.

He said the property was surplus to the needs of the previous owner, who initially planned to redevelop it but had since acquired another site at Nundah.

The building, including a metal-clad shed for motorcycle storage, was purpose-built by Australia Post in the early 1990s and it has occupied the site since.

It divested the property in a $1.45 million leaseback deal in 2008 and the following year it changed hands again for $1.68 million.