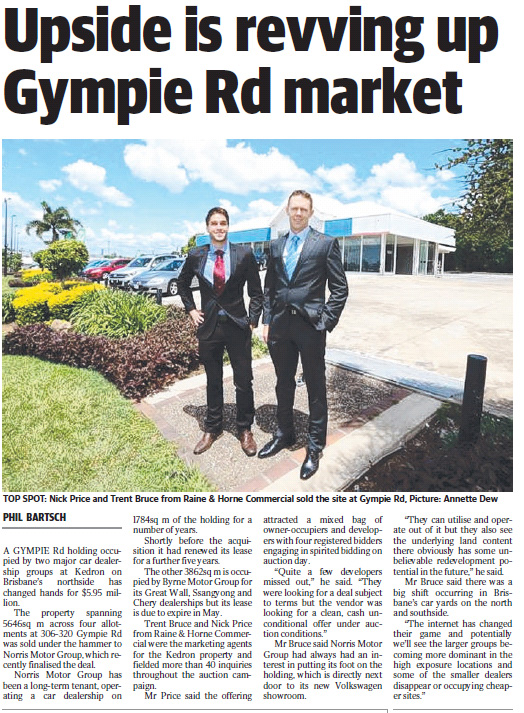 The property spanning 5646sqm across four allotments at 306-320 Gympie Rd was sold under the hammer to Norris Motor Group, which recently finalised the deal.

Norris Motor Group has been a long-term tenant, operating a car dealership on 1784sqm of the holding for a number of years.

Shortly before the acquisition it had renewed its lease for a further five years.

The other 3862sqm is occupied by Byrne Motor Group for its Great Wall, Ssangyong and Chery dealerships but its lease is due to expire in May.

Trent Bruce and Nick Price from Raine & Horne Commercial were the marketing agents for the Kedron property and fielded more than 40 inquiries throughout the auction campaign.

“Quite a few developers missed out,” he said. “They were looking for a deal subject to terms but the vendor was looking for a clean, cash unconditional offer under auction conditions.

Mr Bruce said Norris Motor Group had always had an interest in putting its foot on the holding, which is directly next door to its new Volkswagen showroom.

“They can utilise and operate out of it but they also see the underlying land content there obviously has some unbelievable redevelopment potential in the future,” he said.

Mr Bruce said there was a big shift occurring in Brisbane’s car yards on the north and southside.

“The internet has changed their game and potentially we’ll see the larger groups becoming more dominant in the high exposure locations and some of the smaller dealers disappear or occupying cheaper sites..”