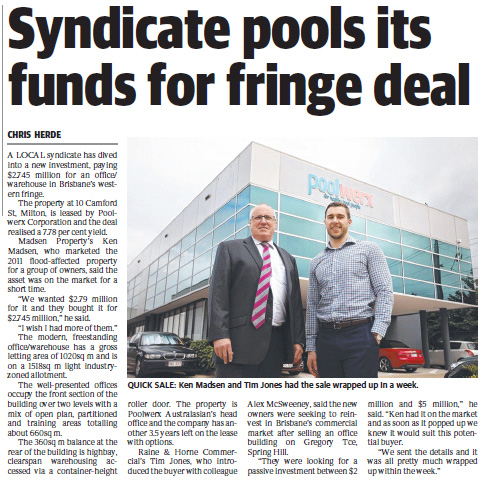 A LOCAL syndicate has dived into a new investment, paying $2.745 million for an office/ warehouse in Brisbane’s western fringe.

The property at 10 Camford St, Milton, is leased by Poolwerx Corporation and the deal realised a 7.78 per cent  yield.

Madsen Property’s Ken Madsen, who marketed the 2011 flood-affected property for a group of owners, said the

asset was on the market for a short time.

I wish I had more of them.” The modern, freestanding office/warehouse has a gross letting area of 1020sq m and is on a 1518sq m light industry zoned allotment.

The well-presented offices occupy the front section of the building over two levels with a mix of open plan,  partitioned and training areas totalling about 660sqm.

The 360sq m balance at the rear of the building is highbay, clearspan warehousing accessed via a container-height roller door. The property is Poolwerx Australasian’s head office and the company has another 3.5 years left on the lease with options.

“They were looking for a passive investment between $2 million and $5 million,” he said. “Ken had it on the market and as soon as it popped up we knew it would suit this potential buyer.

“We sent the details and it was all pretty much wrapped up within the week.”