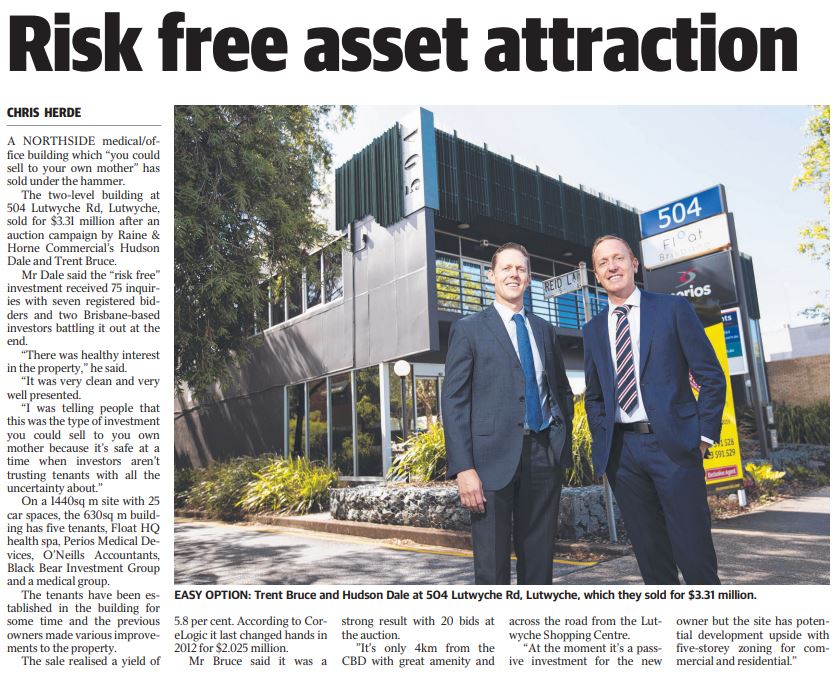 A NORTHSIDE medical/office building which “you could sell to your own mother” has sold under the hammer.

The two-level building at 504 Lutwyche Rd, Lutwyche, sold for $3.31 million after an auction campaign by Raine & Horne Commercial’s Hudson Dale and Trent Bruce.

Mr Dale said the “risk free” investment received 75 inquiries with seven registered bidders and two Brisbane-based investors battling it out at the end.

“There was healthy interest in the property,” he said. “It was very clean and very well presented.

“I was telling people that this was the type of investment you could sell to you own mother because it’s safe at a time when investors aren’t trusting tenants with all the uncertainty about.”

The tenants have been established in the building for some time and the previous owners made various improvements to the property.

Mr Bruce said it was a strong result with 20 bids at the auction.

”It’s only 4km from the CBD with great amenity and across the road from the Lutwyche Shopping Centre.

“At the moment it’s a passive investment for the new owner but the site has potential development upside with five-storey zoning for commercial and residential.”