QUICK SALE FOR A BANYO BEAUTY 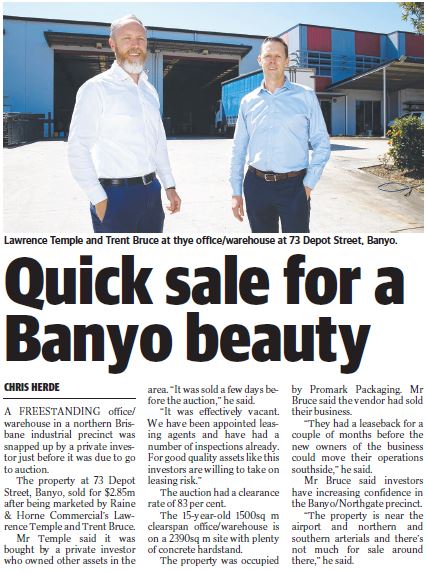 A FREESTANDING office/warehouse in a northern Brisbane industrial precinct was snapped up by a private investor just before it was due to go to auction.

The property at 73 Depot Street, Banyo, sold for $2.85m after being marketed by Raine & Horne Commercial’s Lawrence Temple and Trent Bruce.

Mr Temple said it was bought by a private investor who owned other assets in the area. “It was sold a few days before the auction,” he said.

“It was effectively vacant. We have been appointed leasing agents and have had a number of inspections already. For good quality assets like this investors are willing to take on leasing risk.”

The auction had a clearance rate of 83 per cent.

The 15-year-old 1500sqm clearspan office/warehouse is on a 2390sq m site with plenty of concrete hardstand.

The property was occupied by Promark Packaging. Mr Bruce said the vendor had sold their business.

“They had a leaseback for a couple of months before the new owners of the business could move their operations southside,” he said.

“The property is near the airport and northern and southern arterials and there’s not much for sale around there, "he said.