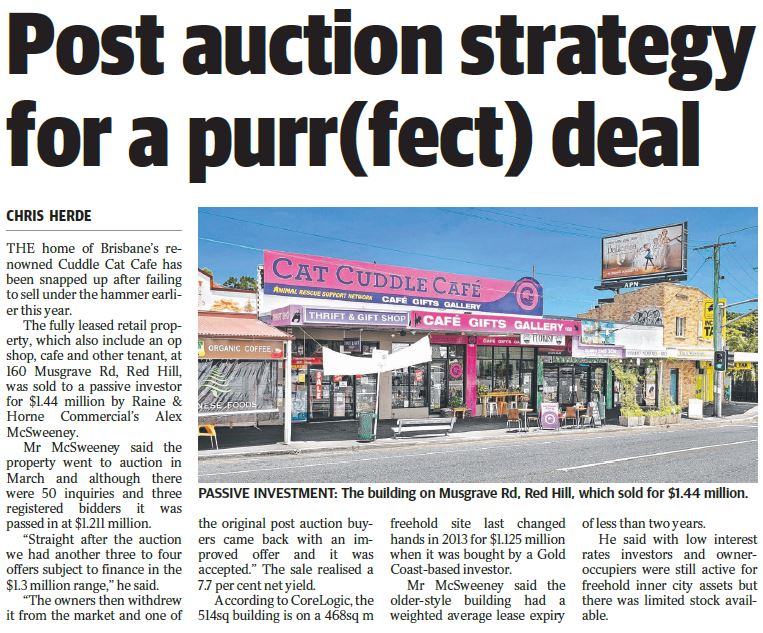 THE home of Brisbane’s renowned Cuddle Cat Cafe has been snapped up after failing to sell under the hammer earlier this year.

The fully leased retail property, which also include an op shop, cafe and other tenant, at 160 Musgrave Rd, Red Hill, was sold to a passive investor for $1.44 million by Raine & Horne Commercial’s Alex McSweeney.

Mr McSweeney said the property went to auction in March and although there were 50 inquiries and three registered bidders it was passed in at $1.211 million.

“Straight after the auction we had another three to four offers subject to finance in the $1.3 million range,” he said.

“The owners then withdrew it from the market and one of the original post auction buyers came back with an improved offer and it was accepted.” The sale realised a 7.7 per cent net yield.

7.7 per cent net yield. According to CoreLogic, the 514sq building is on a 468sqm freehold site last changed hands in 2013 for $1.125 million when it was bought by a Gold Coast-based investor.

He said with low interest rates investors and owner occupiers were still active for freehold inner city assets but there was limited stock available.