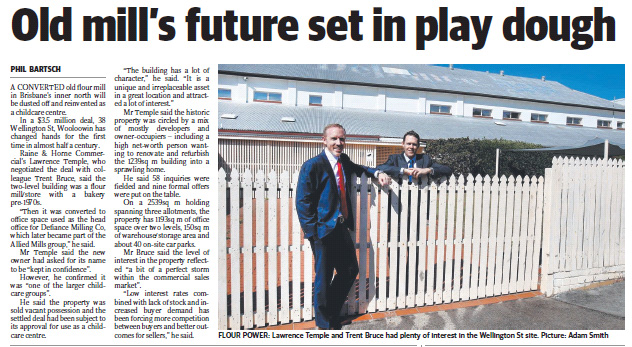 A CONVERTED old flour mill in Brisbane’s inner north will be dusted off and reinvented as a childcare centre.

In a $3.5 million deal, 38 Wellington St, Wooloowin has changed hands for the first time in almost half a  century.

Raine & Horne Commercial’s Lawrence Temple, who negotiated the deal with colleague Trent Bruce, said the two-level building was a flour mill/store with a bakery pre-1970s.

“Then it was converted to office space used as the head office for Defiance Milling Co, which later became part of the Allied Mills group,” he said.

Mr Temple said the new owner had asked for its name to be “kept in confidence”.

However, he confirmed it was “one of the larger childcare groups”.

He said the property was sold vacant possession and the settled deal had been subject to its approval for use as a childcare centre.

“The building has a lot of character,” he said. “It is a unique and irreplaceable asset in a great location and attracted a lot of interest.”

Mr Temple said the historic property was circled by a mix of mostly developers and owner-occupiers – including a high net-worth person wanting to renovate and refurbish the 1239sqm building into a sprawling home.

He said 58 inquiries were fielded and nine formal offers were put on the table.

On a 2539sqm holdings panning three allotments, the property has 1193sqm of office space over two levels, 150sqm of warehouse/storage area and about 40 on-site car parks.

Mr Bruce said the level of interest in the property reflected “a bit of a perfect storm within the commercial sales market”.

“Low interest rates combined with lack of stock and increased buyer demand has been forcing more competition between buyers and better outcomes for sellers,” he said.