OFFICE DEVELOPMENT PAYS OFF AS BUYER TAKES THE LOT 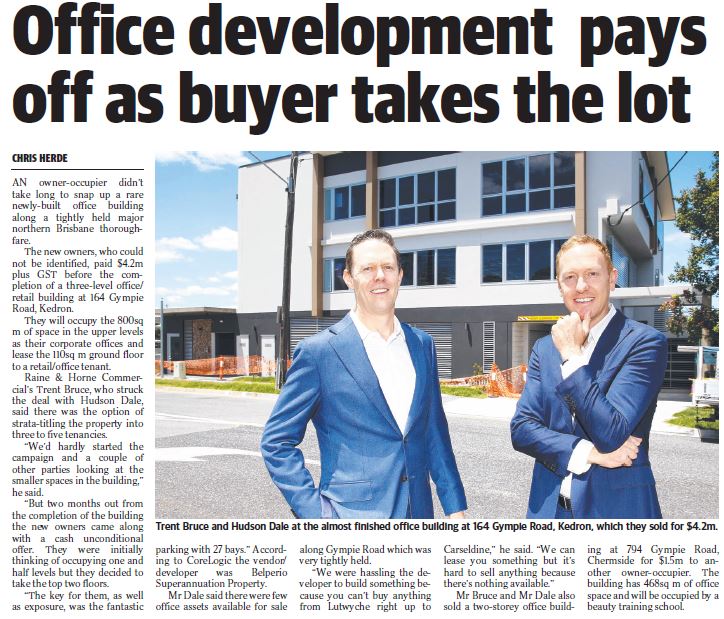 The new owners, who could not be identified, paid $4.2m plus GST before the completion of a three-level office/retail building at 164 Gympie Road, Kedron.

They will occupy the 800sqm of space in the upper levels as their corporate offices and lease the 110sqm ground floor to a retail/office tenant.

Raine & Horne Commercial's Trent Bruce, who struck the deal with Hudson Dale, said there was the option of strata-titling the property into three to five tenancies.

"We'd hardly started the campaign and a couple of other parties looking at the smaller spaces in the building," he said.

"But two months out from the completion of the building the new owners came along with a cash unconditional offer. They were initially thinking of occupying one and half levels but they decided to take the top two floors. The key for them, as well as exposure, was the fantastic parking with 27 bays."

According to CoreLogic the vendor/developer was Belperio Superannuation Property.

Mr Dale said there were a few office assests available for sale along Gympie Road which was very tightly held.

"We were hassling the developer to build something because you can't buy anything from Lutwyche right up to Caresldine," he said. "We can lease you something but it's hard to sell anything because there's nothing available."

Mr Bruce and Mr Dale also sold a two-storey office building at 794 Gympie Road, Chermside for $1.5m to another owner-occupier. The building has 4687sqm of office space and will be occupied by a beauty training school.