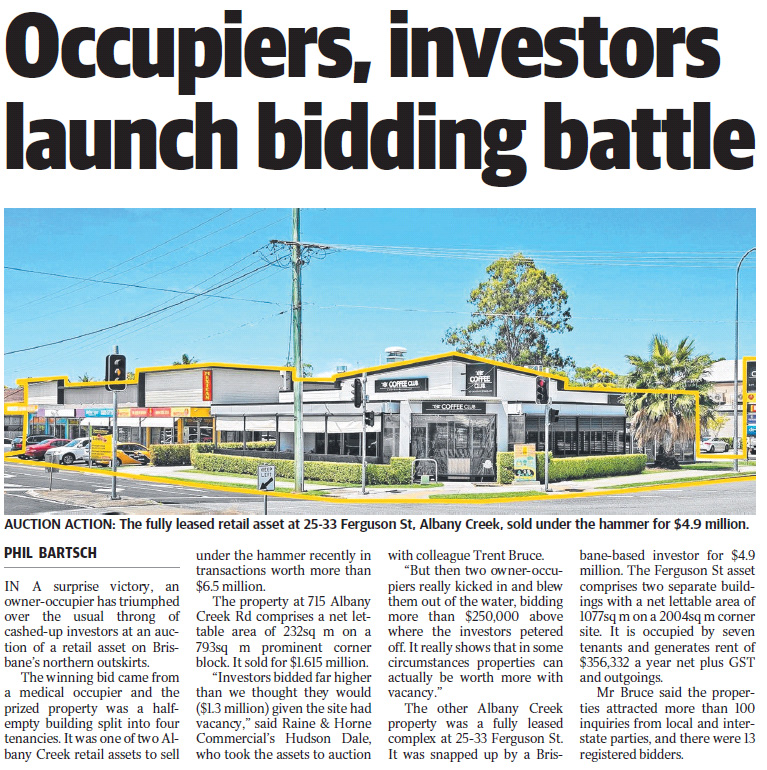 IN A surprise victory, an owner-occupier has triumphed over the usual throng of cashed-up investors at an auction of a retail asset on Brisbane’s northern outskirts.

The winning bid came from a medical occupier and the prized property was a halfempty building split into four tenancies. It was one of two Albany Creek retail assets to sell under the hammer recently in transactions worth more than $6.5 million.

“Investors bidded far higher than we thought they would ($1.3 million) given the site had vacancy,” said Raine & Horne Commercial’s Hudson Dale, who took the assets to auction with colleague Trent Bruce.

“But then two owner-occupiers really kicked in and blew them out of the water, bidding more than $250,000 above where the investors petered off. It really shows that in some circumstances properties can actually be worth more with vacancy.”

The other Albany Creek property was a fully leased complex at 25-33 Ferguson St. It was snapped up by a Brisbane- based investor for $4.9 million. The Ferguson St asset comprises two separate buildings with a net lettable area of 1077sq m on a 2004sq m corner site. It is occupied by seven tenants and generates rent of $356,332 a year net plus GST and outgoings.

Mr Bruce said the properties attracted more than 100 inquiries from local and interstate parties, and there were 13 registered bidders.