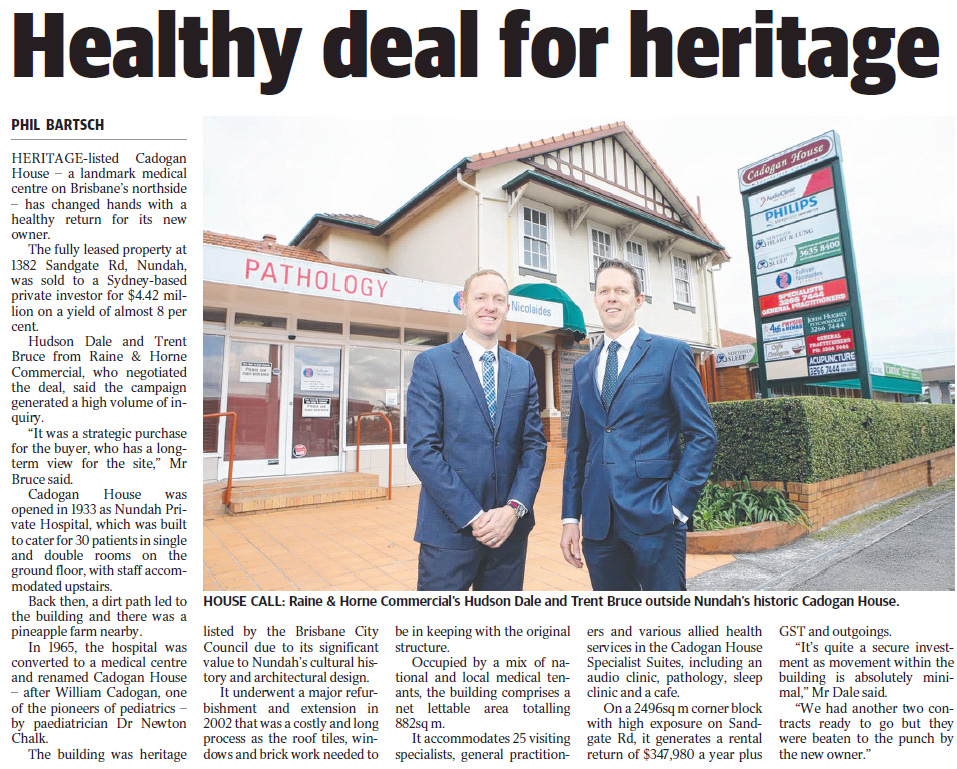 HERITAGE-listed Cadogan House – a landmark medical centre on Brisbane’s northside – has changed hands with a healthy return for its new owner.

The fully leased property at 1382 Sandgate Rd, Nundah, was sold to a Sydney-based private investor for $4.42 million on a yield of almost 8 per cent.

Hudson Dale and Trent Bruce from Raine & Horne Commercial, who negotiated the deal, said the campaign generated a high volume of inquiry.

“It was a strategic purchase for the buyer, who has a longterm view for the site,” Mr Bruce said.

Cadogan House was opened in 1933 as Nundah Private Hospital, which was built to cater for 30 patients in single and double rooms on the ground floor, with staff accommodated upstairs.

Back then, a dirt path led to the building and there was a pineapple farm nearby.

In 1965, the hospital was converted to a medical centre and renamed Cadogan House – after William Cadogan, one of the pioneers of pediatrics – by paediatrician Dr Newton Chalk.

The building was heritage listed by the Brisbane City Council due to its significant value to Nundah’s cultural history and architectural design.

It underwent a major refurbishment and extension in 2002 that was a costly and long process as the roof tiles, windows and brick work needed to be in keeping with the original structure.

Occupied by a mix of national and local medical tenants, the building comprises a net lettable area totalling 882sq m.

On a 2496sq m corner block with high exposure on Sandgate Rd, it generates a rental return of $347,980 a year plus GST and outgoings.

“It’s quite a secure investment as movement within the building is absolutely minimal,” Mr Dale said.

“We had another two contracts ready to go but they were beaten to the punch by the new owner.”