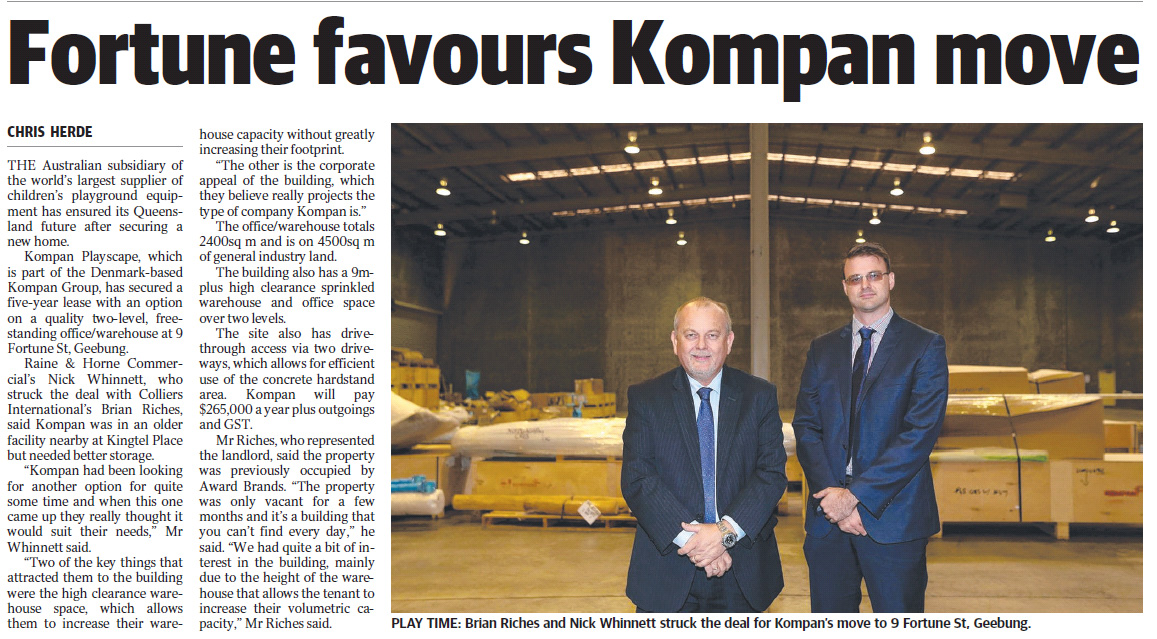 THE Australian subsidiary of the world’s largest supplier of children’s playground equipment has ensured its Queensland future after securing a new home.

Kompan Playscape, which is part of the Denmark-based Kompan Group, has secured a five-year lease with an option on a quality two-level, freestanding office/warehouse at 9 Fortune St, Geebung.

Raine & Horne Commercial’s Nick Whinnett, who struck the deal with Colliers International’s Brian Riches, said Kompan was in an older facility nearby at Kingtel Place but needed better storage.

“Kompan had been looking for another option for quite some time and when this one came up they really thought it would suit their needs,” Mr Whinnett said.

“Two of the key things that attracted them to the building were the high clearance warehouse space, which allows them to increase their warehouse capacity without greatly increasing their footprint.

“The other is the corporate appeal of the building, which they believe really projects the type of company Kompan is.”

The office/warehouse totals 2400sq m and is on 4500sq m of general industry land.

The building also has a 9mplus high clearance sprinkled warehouse and office space over two levels.

The site also has drivethrough access via two driveways, which allows for efficient use of the concrete hardstand area. Kompan will pay $265,000 a year plus outgoings and GST.

Mr Riches, who represented the landlord, said the property was previously occupied by Award Brands. “The property was only vacant for a few months and it’s a building that you can’t find every day,” he said. “We had quite a bit of interest in the building, mainly due to the height of the warehouse that allows the tenant to increase their volumetric capacity,” Mr Riches said.