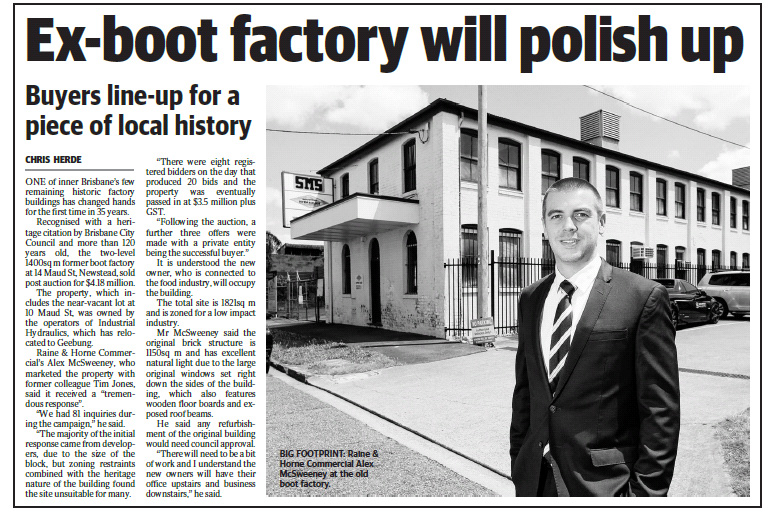 Buyers line-up for a piece of local history

ONE of inner Brisbane’s few remaining historic factory buildings has changed hands for the first time in 35 years.

The property, which includes the near-vacant lot at 10 Maud St, was owned by the operators of Industrial Hydraulics, which has relocated to Geebung.

“We had 81 inquiries during the campaign,” he said.

“The majority of the initial response came from developers, due to the size of the block, but zoning restraints combined with the heritage nature of the building found the site unsuitable for many.

“There were eight registered bidders on the day that produced 20 bids and the property was eventually passed in at $3.5 million plus GST

“Following the auction, a further three offers were made with a private entity being the successful buyer.”

It is understood the new owner, who is connected to the food industry, will occupy the building.

The total site is 1821sqm and is zoned for a low impact industry.

Mr McSweeney said the original brick structure is 1150sqm and has excellent natural light due to the large original windows set right down the sides of the building, which also features wooden floor boards and exposed roof beams.

He said any refurbishment of the original building would need council approval.

“There will need to be a bit of work and I understand the new owners will have their office upstairs and business downstairs,” he said.