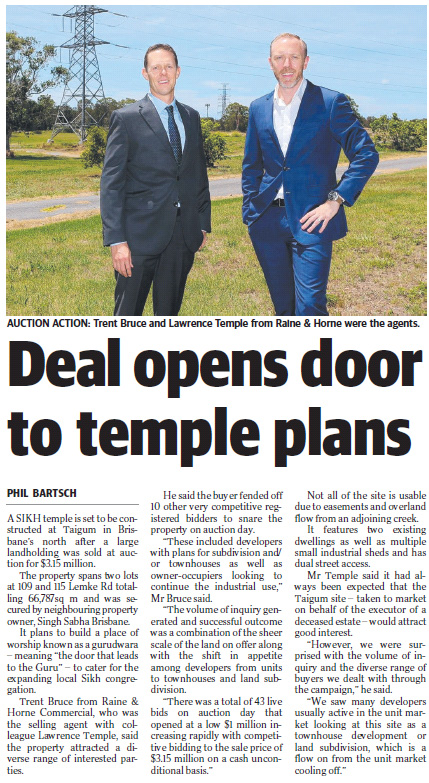 A SIKH temple is set to be constructed at Taigum in Brisbane’s north after a large landholding was sold at auction for $3.15 million.

It plans to build a place of worship known as a gurudwara – meaning “the door that leads to the Guru” – to cater for the expanding local Sikh congregation.

Trent Bruce from Raine & Horne Commercial, who was the selling agent with colleague Lawrence Temple, said the property attracted a diverse range of interested parties.

He said the buyer fended off 10 other very competitive registered bidders to snare the property on auction day.

“These included developers with plans for subdivision and/ or townhouses as well as owner-occupiers looking to continue the industrial use,” Mr Bruce said.

“The volume of inquiry generated and successful outcome was a combination of the sheer scale of the land on offer along with the shift in appetite among developers from units to townhouses and land subdivision.

“There was a total of 43 live bids on auction day that opened at a low $1 million increasing rapidly with competitive bidding to the sale price of $3.15 million on a cash unconditional basis.”

Not all of the site is usable due to easements and overland flow from an adjoining creek.

Mr Temple said it had always been expected that the Taigum site – taken to market on behalf of the executor of a deceased estate – would attract good interest.

“However, we were surprised with the volume of inquiry and the diverse range of buyers we dealt with through the campaign,” he said.

land subdivision, which is a flow on from the unit market cooling off.”