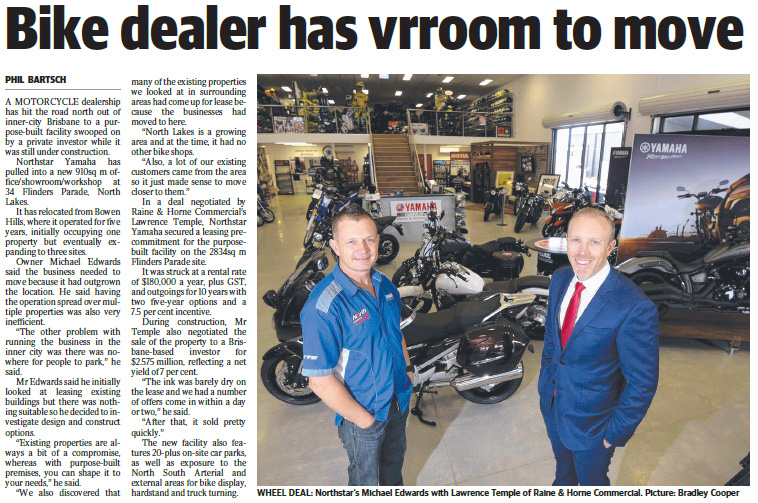 A MOTORCYCLE dealership has hit the road north out of inner-city Brisbane to a purpose- built facility swooped on by a private investor while it was still under construction.

It has relocated from Bowen Hills, where it operated for five years, initially occupying one property but eventually expanding to three sites.

Owner Michael Edwards said the business needed to move because it had outgrown the location. He said having the operation spread over multiple properties was also very inefficient.

“The other problem with running the business in the inner city was there was nowhere for people to park,” he said.

Mr Edwards said he initially looked at leasing existing buildings but there was nothing suitable so he decided to investigate design and construct options.

“Existing properties are always a bit of a compromise, whereas with purpose-built premises, you can shape it to your needs,” he said.

“We also discovered that many of the existing properties we looked at in surrounding areas had come up for lease because the businesses had moved to here.

“North Lakes is a growing area and at the time, it had no other bike shops.

“Also, a lot of our existing customers came from the area so it just made sense to move closer to them.”

During construction, Mr Temple also negotiated the sale of the property to a Brisbane- based investor for $2.575 million, reflecting a net yield of 7 per cent.

“The ink was barely dry on the lease and we had a number of offers come in within a day or two,” he said.

“After that, it sold pretty quickly.”

The new facility also features 20-plus on-site car parks, as well as exposure to the North South Arterial and external areas for bike display, hardstand and truck turning.