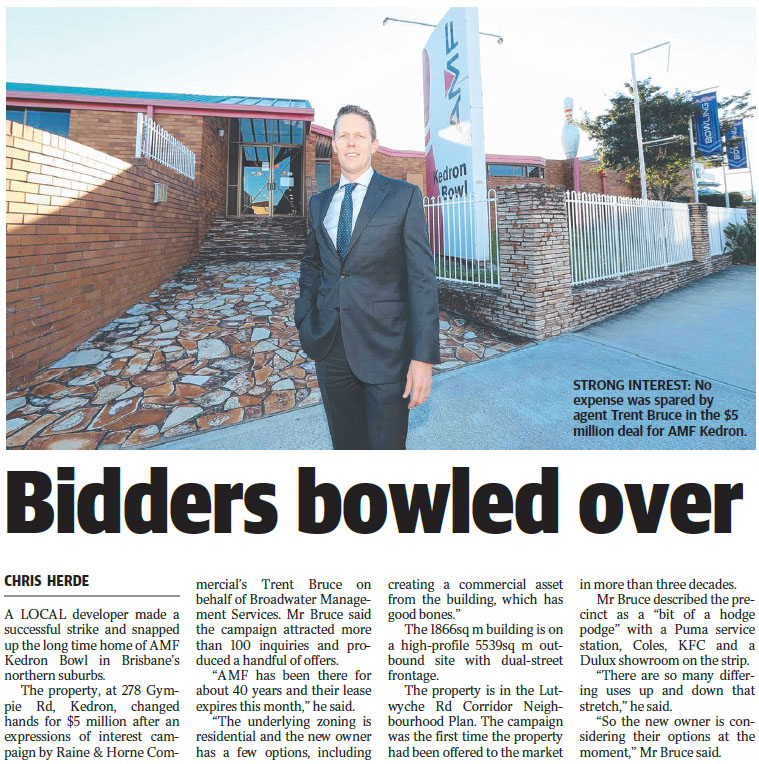 A LOCAL developer made a successful strike and snapped up the long time home of AMF Kedron Bowl in Brisbane’s northern suburbs.

The property, at 278 Gympie Rd, Kedron, changed hands for $5 million after an expressions of interest campaign by Raine & Horne Commercial’s Trent Bruce on behalf of Broadwater Management Services. Mr Bruce said the campaign attracted more than 100 inquiries and produced a handful of offers.

“AMF has been there for about 40 years and their lease expires this month,” he said.

“The underlying zoning is residential and the new owner has a few options, including creating a commercial asset from the building, which has good bones.”

The 1866sq m building is on a high-profile 5539sq m outbound site with dual-street frontage.

The property is in the Lutwyche Rd Corridor Neighbourhood Plan. The campaign was the first time the property had been offered to the market in more than three decades.

Mr Bruce described the precinct as a “bit of a hodge podge” with a Puma service station, Coles, KFC and a Dulux showroom on the strip.

“There are so many differing uses up and down that stretch,” he said.

“So the new owner is considering their options at the moment,” Mr Bruce said.