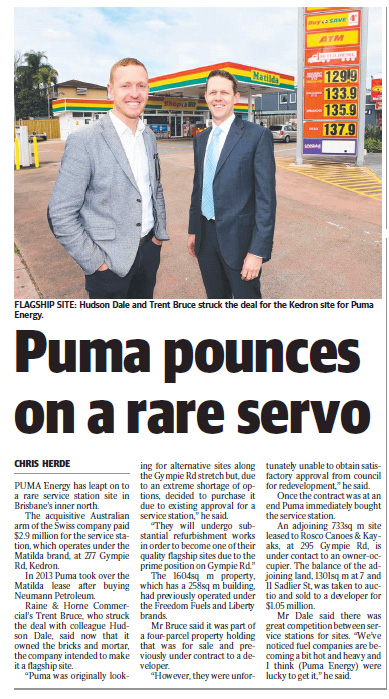 PUMA Energy has leapt on to a rare service station site in Brisbane’s inner north.

The acquisitive Australian arm of the Swiss company paid $2.9 million for the service station, which operates under the Matilda brand, at 277 Gympie Rd, Kedron.

In 2013 Puma took over the Matilda lease after buying Neumann Petroleum.

Raine & Horne Commercial’s Trent Bruce, who struck the deal with colleague Hudson Dale, said now that it owned the bricks and mortar, the company intended to make it a flagship site.

“Puma was originally looking for alternative sites along the Gympie Rd stretch but, due to an extreme shortage of options, decided to purchase it due to existing approval for a service station,” he said.

“They will undergo substantial refurbishment works in order to become one of their quality flagship  sites due to the prime position on Gympie Rd.” The 1604sqm property, which has a 258sqm building, had previously operated under the Freedom Fuels and Liberty brands.

Mr Bruce said it was part of a four-parcel property holding that was for sale and previously under contract to a developer.

“However, they were unfortunately unable to obtain satisfactory approval from council for redevelopment,” he said.

Once the contract was at an end Puma immediately bought the service station.

An adjoining 733sqm site leased to Rosco Canoes & Kayaks, at 295 Gympie Rd, is under contact to an owner-occupier. The balance of the adjoining land, 1301sqm at 7 and 11 Sadlier St, was taken to auction and sold to a developer for $1.05 million.

Mr Dale said there was great competition between service stations for sites. “We’ve noticed fuel companies are becoming a bit hot and heavy and I think (Puma Energy) were lucky to get it,” he said.